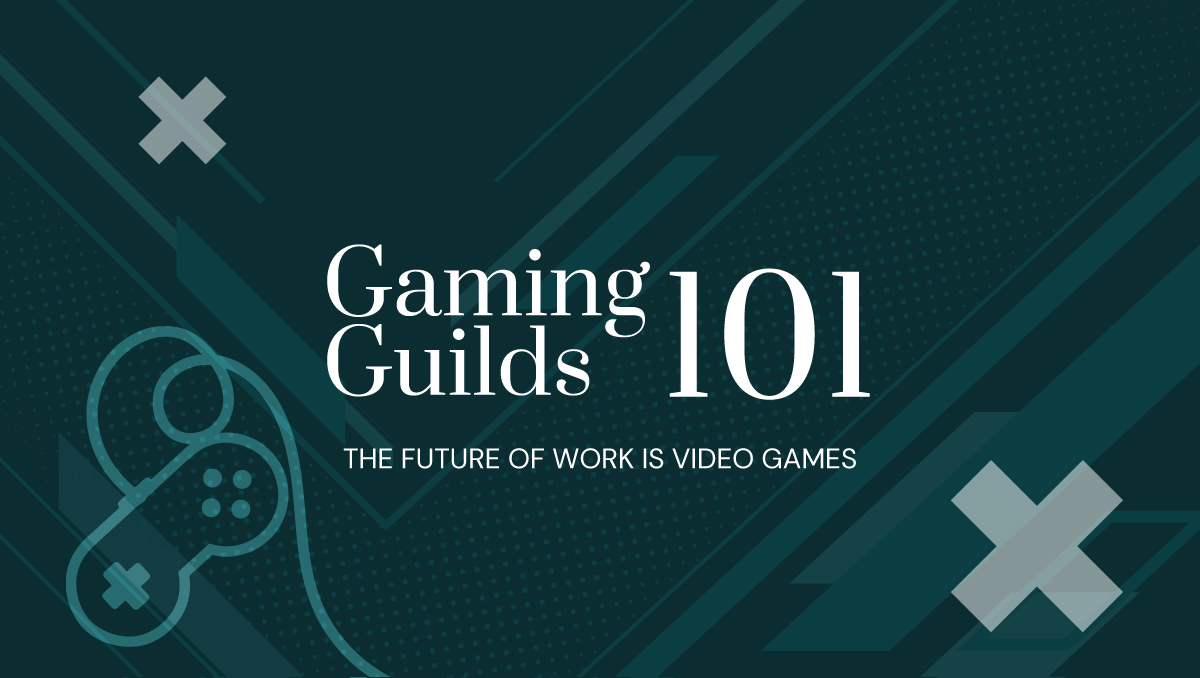 Blockchain gaming took the market over by a storm in Q4,2021. The rise of P2E games led to a rise in gaming guilds who play an important role in the ecosystem in signaling to good projects and building communities. A gaming guild is a collection or group of gamers that organize to play games together and share information; such groups/clans act as a resource for gamers who play them regularly and act as a social community making the experience more engaging and fun. Gaming guilds have existed for decades however with the P2E wave, blockchain gaming builds have become an economic powerhouse generating massive income and attracting venture capital.

YGG was the first mover and one of the most prominent gaming guilds that started this movement. YGG is a gaming guild structured as a DAO, that gives governance rights to its token holders. The guild acts as a community-controlled wallet investing in blockchain games and their in-game assets. In these games, the players get rewarded in crypto tokens by playing games and rent in-game assets owned by the guild to play the game.

Axie Infinity is a pokemon-style play-to-earn game that led the growth of the Play-to-Earn gaming movement, providing sustenance to many, as seen in this documentary. Virtual pets called Axies, can be bought and trained to battle against each other, to earn  Smooth Love Potion ($SLP), an in-game token that can be earned by winning matches. $SLP can be traded against USD or Ethereum and be converted to real money on exchanges. Axie Infinity’s native token $AXS also experienced a spectacular rise in Q3 of 2021, going from 3$ to an All-Time High of $164.90 on November 6th,2021. Axie Infinity now ranks amongst the top dApps in-terms of monthly revenue in comparison to other dApps.

Play-to-Earn(P2E) is a gaming-focused economic model that rewards players with in-game crypto tokens later redeemed to fiat. In Axie Infinity, the in-game token is Smooth Love Potion, awarded to players after they complete tasks and win battles. Using $SLP, the players can breed and buy a new axie. At the same time, players can also trade $SLP to fiat on major cryptocurrency exchanges like Binance. Axies are ERC721 based NFTs that can be traded on the axie marketplace.

We already know that gamers spend billions buying in-game items, cosmetics and upgrades however P2E revolutionizes this by allowing players to buy in-out of a game or make more money on their investment. This rewards players who put in many hours and incentivises players to play the game more. Thus it has benefits for both players and developers, the element of investing/earning from the game can potentially encourage more spending by players. P2E economics also sets up a base for developing a potential Metaverse; we live in a simulated world based on the real one. Perfecting P2E economics will be the  basis of developing the economic systems of the Metaverse.

Games as a catalyst for mass adoption of crypto

The following article by CNBC accurately shows how a small Philippines village is making a livelihood by playing Axie Infinity. The villagers lost jobs in the pandemic and turned to play Axie Infinity, which enabled them to earn more than the nation’s minimum wage.

Blockchain is the fundamental technology that enables P2E gaming, in-game assets and currencies are just implementations of the ERC20 and 721 methods. This means that gaming can potentially open the flood gates to mass crypto adoption.

The gaming market is also the largest entertainment industry projected to grow around 205 Billion Dollars in 2023, thus P2E has an incredibly high TAM. With better games, virtual reality and COVID lockdowns, this growth is expected to continue. Combined, all these factors are leading us towards virtual worlds with P2E and virtual economies.

Today, Gaming guilds have become a platform that provides gamers with funds, knowledge and assets to play these P2E games. The gaming guilds take a commission or share from a player’s earnings. It is prevalent in P2E games like Axie Infinity because even buying an Axie to get started with the game requires substantial funds. Axie Infinity has successfully onboarded millions of players into the blockchain narrative, thus catalyzing growth of the entire blockchain ecosystem.

According to the latest figures by blockchain space, there are more than 400 guilds with almost 300 members per guild. This is a very healthy count for an emerging concept and shows the potential of where the gaming guilds can go. The audience for play-to-earn games is also likely to grow on streaming platforms like twitch, this should also lead to an increase in the number of players in the P2E gaming ecosystems.

It can also be observed that most guilds are based in the Philippines, with over 700 guilds. This shows that the countries with low per capita income have a higher interest in using P2E as an alternate source of earnings. For instance, in the Philippines, with a daily minimum wage of almost 10$. Even if we consider the minimum cost of an Axie currently in the market is $50, players can buy or rent them with a relatively modest investment. Not to mention most long terms would have bought Axies at much lower prices.

It can also be noted that the average daily SLP earned is around 117, which on most days is more than the daily minimum wage of the Philippines. Anyone with a good Axie lineup can make more than 300 SLP a day. In a country like the Philippines, with one of the worst-covid hit economies, a daily income of even 10$ does wonders.

Although many guilds have an average activity rate of almost 8% daily, that’s slowly increasing as many people still embrace play-to-earn technology. Also with an average of 9 scholars in a guild, this makes the total scholar(player) count of around 36000, across 4000 guilds.

Conceptual Framework of a Guild

Yield Guild Games, as discussed earlier, is one of the first successful play-to-earn gaming guild/DAO, so we will use its framework to explain the typical structure of a guild. YGG earns through 3 primary ways.

They have also created Sub-DAOs that focus on a particular game or theme within the DAO. Sub-DAOs have their own set of rules and governance but still, contribute to the total earnings of the main DAO. YGG also makes some prominent returns from investments in other DAOs that they partner with. For example, Merit Circle is one of the DAOs partnered with YGG.

These are the assets that the guild secures from the games that it invests into. These in-game assets are later rented out to the scholars in the guild who use them to earn in-game tokens, in the case of axie infinity SLP(Smooth Love Potion). Since these are digital assets that have their own market, they often end up going up in prices through speculation. When a big guild buys assets that itself increases the demand for that NFT asset.

These are the seed investments done by a guild into games that have promising concepts and tokenomics. Generally, the guild takes in-game tokens and assets like NFTs from the game invested in. This has a two way incentive as it is a positive signal for the game when a big guild shows interest, and the guild gets to invest into the game early at cheaper prices.

Scholarship programs are the in-house programs in a guild where the guild lends its in-game assets to the scholars/players to play in the game. Eg: Yield Guild Games lends its NFT/in-game assets to Axie players to play and earn SLP, in return the guild takes some percentage of the SLP earned by the scholars. Some guilds are also running programs of renting NFTs to any willing players in exchange of the profit made by playing the game.

Each Sub-DAO is customized to focus on specific activities and assets of a particular game. They have their own rules but still function under the main DAO and contribute to the earning of the main DAO. They allow a guild to operate more efficiently by localizing operations and streamlining the processes of all the different games.

3rd party DAOs are the DAOs that a guild partners with to increase their ability to attract better investments. A good example would be Yield Guild Games’ partnership with Merit Circle. They both share their expertise and plan to do play-to-earn conferences and e-sports tournaments to promote play-to-earn games collaboratively and utilize the force of both communities.

Guilds like Yield Guild Games provide early financial and operational support to new guilds and sub-DAOs to strengthen the ecosystem.

How do guilds make money?

Guilds have wallets which own crypto assets and NFTs of different games around the ecosystem. These wallets also rent out NFTs to players and accrue earnings of the Guild scholars/players. Guilds optimize the assets owned by the community for maximum utility and share the profits earned from the earnings via its native tokens. Also increase in the TVL of a guilds treasury increases the value of the holders investments.

Since they also take SAFT offerings in the in-game tokens of the games that they invest in, most guild treasuries stand to make a good amount of money just through these investments.

The following table below provides an overview of some of the guilds currently on-chain:

Catalysts for a Guilds growth

A guild as a group needs to grow in both member count and investment bought into it, so the following are some of the significant catalysts that promote the growth of a guild and make it a potential investment.

Many game guilds are investing heavily into newer game projects similar to a VC vehicle in and even helping projects with marketing and general strategy. For example, GGG has an investment wing that incubates and invests in many newer P2E games. Good Games Guild has set up Good Guild labs that works alongside many gaming projects consulting them in marketing, strategy and other needs.

The above infographic captures the size of human and capital resources some of these guilds have accumulated. The guilds purchase in-game assets and the game’s native tokens in return for the investment made. These in-game assets are later lent to the scholars & players to generate earnings by playing the game; later, the scholars share a part of their earnings with the guild.

Blockchain gaming has grown exponentially in the year 2021. The world’s attention is slowly shifting to blockchain; as investors from different sectors seek to diversify avenues for capital allocation and get behind the growth in the crypto industry. As most of the world has operated under extended periods of lockdowns, gaming as a leisure activity has only grown. With the play-to-earn models developing we expect a large interest from this growing gaming community to try out these play-to-earn offerings. We also expect traditional giants in the gaming business to experiment with the P2E model.

Gaming guilds are at the frontiers of this revolution acting both as an ecosystem enabler and onboarding vehicle for players and developers. As we move forward we are likely to see guilds compete against each other to compete and build prestige in these gaming communities. Gaming is inherently social but with the added layer of finance is going to create seismic shifts into current business models of the industry. We believe that the P2E gaming movement is still in its infancy and will likely go through several iterations before finding product market fit.